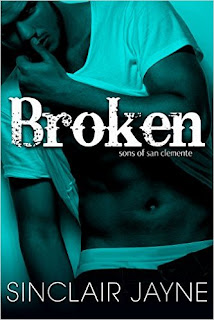 Lane Duke, game designer and mogul, is carving the edge of his company’s most advanced release just days away. Excitement and tension are jacked tight. The future is wide open. Until he sees his past rise out of the Pacific in a barely there bikini, and 12 years disappear in a blink.

Luz De Luna doesn’t want to dig up the past and Lane is her past with a capital P. Newly divorced, she’s returned to San Clemente to bury some ghosts, but it’s hard to move on when the path to personal redemption is blocked by the one man who won’t forgive and she can’t forget.

An engaging story written with such enthusiasm it was easy to visualize it unfolding right before my eyes.

Luz de Luna Duke's marriage didn't work out as she planned.  She spent ten years with Alex and his controlling family.  It finally came to the point where Luz couldn't take it anymore.   She is finished with the lies and demands of the Dukes.  She wants a divorce.

Luz has returned to her home town of San Clemente looking for her sister Paz.   She is ready to make amends with Paz and start her life over again.  But who was the first person she runs into, none other than Lane Duke, Alex's brother, Luz's first love.

Lane never stopped loving Luz.  He couldn't believe she was back in town.   Why was she there?   Surely his family didn't send her to find him.  He turned away from his family twelve years ago and never looked back.  Lane fights his feelings for Luz at first.  Then he decides to give in and do whatever it takes to get her back, even if it means going up against his powerful family.

This series is highly addictive.  I am ready for another addition right now.  The passion is off the charts in this book.