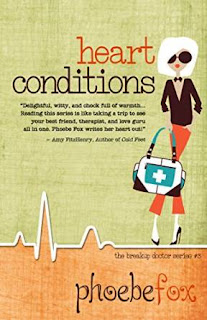 Breakup Doctor Brook Ogden has spent the last year sifting through the fallout from the disastrous decision that led to her unconscious uncoupling with boyfriend Ben Garrett. Despite advising her clients you can’t be friends with an ex, she and Ben have somehow begun to stitch together a friendship—one Brook hopes is slowly turning into more. That is, until Ben introduces his new girlfriend, Perfect Pamela, a paragon of womanly virtues who is everything Brook is not.

While Brook navigates her newly volatile emotional life, an unwelcome surprise shows up on her doorstep: the ex-fiancé who broke her heart two years ago—one month before their wedding. Between her ex’s desire to rekindle their attachment, her best friend Sasha’s unexpected crisis, and her own unsquelchable feelings for Ben, Brook finds herself questioning the personal progress she’s made in the last two years—and threatened with the highest-stakes Breakup Doctor failures she’s ever faced.


Brook Ogden, The Breakup Doctor, is a therapist who has her own practice, runs a newspaper column and a radio show to help people move on after their breakup.  But Brook faces a few dilemmas of her own.  First off, trying to be friends with her recent breakup, Ben and his girlfriend, Perfect Pamela, is starting to be a bit more difficult than expected. Then, another ex-boyfriend is back in the picture as well and wants to work through their unfinished business.  To top it off, Brook's best friend Sasha is keeping something from her.   It’s almost enough to send a girl into a complete meltdown.  How will Brook handle everything in her personal life while trying to help those who depend on her professionally?

I didn't read the previous books in this series and felt if I had, I would have had more background on the characters.  But story had a way of telling enough to get through the book, while not giving away too much in case you want to read the previous books.  The story was very vivid and easy to follow and the situations felt like something anyone could be going through.  I thought it was well told and entertaining.
Posted by Janine at 7:47 AM