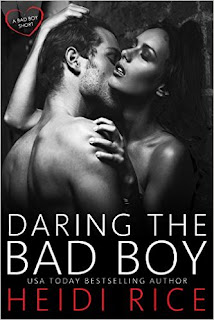 After a trip home to bury his father, US photographer in London Caleb Landry finds himself stranded in a Soho bar full of boozy women brooding his way through his least favourite night of the year.

But when college art teacher Rosie Smith tries out the cheesiest pick-up line ever on him, Cal becomes captivated by this good girl with a filthy mind – especially when he discovers she has a V-Day allergy of her own. So he dares her to one smokin’ hot Valentine’s night hook-up with no questions asked, satisfaction guaranteed…

But when Valentine’s Night turns into the morning after, suddenly Rosie’s asking questions she shouldn’t, and putting Cal in danger of breaking his number one rule.


All she wanted was some hot fun to cure her V-Day curse.  And what better person to do it with than a guy who could kiss her senseless.

It was a dare made by her friends that was supposed to get Rosie Smith out of her dating rut.  Last year on Valentine’s Day her boyfriend dumped her and she hasn’t been with a man since then.  The dare goes all wrong from the start.  First off, Rosie spills her drink on Mr. Abso-Fricking-Luscious, and then she is too drunk and passes out before her hot one night stand even begins.  But the worst part is Rosie doesn’t even remember if anything happened.

Cal Landry is back in London after handling his father’s affairs and dealing with the ghosts of his childhood in New York.   Drinking alone wasn’t the plan, especially not on Valentine’s Day.  But he needed to get hammered before returning to his apartment.  He sure could use a little company in his bed to make returning home a bit more pleasant.  He was about to give up the search and head home when a pretty girl comes up to him with a cheesy pick up line and dumps her drink on him.  The night just got a little more interesting.

He had no idea she was actually a boring good girl in bad girl clothing.  Neither, Rosie or Cal had any idea this chance meeting would lead to true love.

This isn’t your typical good girl, bad boy romance.  It was kicked up a notch with some hilarious situations.  Rosie and her friends made me laugh with the things they said.  I could just picture sitting around with them and my cheeks hurting from laughing and smiling all night.  And the scene where Rosie got Cal to model in her art class was one you won’t forget.