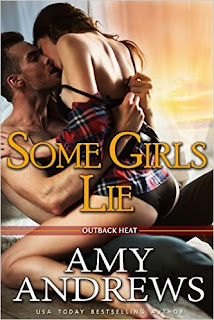 Local pub owner Jemima Jane Ericson is living a lie. She’s been in love with her best friend Ethan since forever. But he fell in love with another woman, married her, and despite their tempestuous relationship and decade old divorce, JJ knows Ethan’s heart is still down for the count. And friendship is better than nothing, right?

Single dad and Jumbuck Springs chief of police, Ethan Weston, hits the pub the night his ex-wife remarries and announces she wants custody of their daughter. When he wakes the next morning to find himself in JJ’s bed he’s mortified that they’d crossed a line they should never have crossed. Until JJ’s abusive ex, Shane, shows up at her door and Ethan claims he and JJ are engaged to protect her.

Both are stunned by the unravelling of their normally sane lives but suddenly it makes sense – JJ gets a deterrent and Ethan gets the respectability of a wife for any custody claims. But when JJ’s life is threatened, Ethan is forced to confront feelings that may just run much deeper than convenience…

Jemima Jane “JJ” Ericson has been in love with Ethan Weston as long as she can remember.  But when he chose to marry someone else, JJ decided being best friends was better than nothing.  That marriage has since then disintegrated and Ethan is raising his daughter on his own.

On the night of Ethan’s ex-wife’s marriage, he shows up at JJ’s bar and gets very drunk.  It turns out his ex wants custody of their daughter too.   One thing leads to another and JJ and Ethan end up in bed.  Ethan regrets it the next morning.

When JJ’s abusive ex-husband shows up in town, Ethan tells him they are engaged to in order to keep her safe.  But Shane does as he pleases and he is not done with JJ yet.  JJ soon finds herself in a situation that is beyond her control.  Will Ethan be able to get to JJ before Shane has his way with her?

Can JJ and Ethan change their status from best friends to lovers or will they always be just best friends? This book had a lot of excitement in it and some very naughty parts as well.  I think it wrapped up the Outback Heat series very well.
Posted by Janine at 7:50 AM