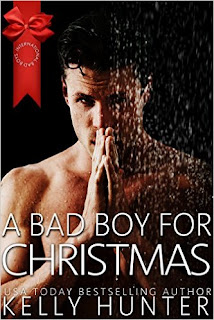 How can he protect his family when he no longer knows what family is?

Cutter Jackson’s perfect world is crumbling. A new-found half-brother, a father short on answers, and a woman who challenges his every word will do that to a man. He’s losing his authority, his morality and his restraint with every breath. And there’s still Christmas and New Year to navigate.

Street-savvy Mia Blake isn’t looking for a place in the family Cutter loves so much. As for the lust that sparks between them, Mia’s more than happy to fan those flames and drive them both a little nuts. She can handle it. She can handle him right up until the moment Cutter decides he wants more than a holiday fling…

The Jackson Brothers
Book 1: The Honeymoon Trap
Book 2: Sympathy for the Devil
Book 3: A Bad Boy for Christmas

The Jackson brothers are about to have their lives changed forever.  This change comes in the form of an older brother that no one knew about.

Mia Blake had no idea she would meet the man of her dreams when she traveled to Brunswick Bay with her best friend, Jackson Nash, to find his father.  Since meeting Cutter, she can't seem to get him out of her mind.

Mia is not just any average woman. She is a tattoo artist, loves vintage cars, street racing and martial arts.  She knows how to handle herself around men.  But can she handle herself around Cutter when he tells her he has fallen in love with her and wants her to stay in Brunswick Bay with him?

This is one of those books that you don't want to end.  There are so many other stories in it that you just want it to keep going on.  I previously read the other two brother's stories and enjoyed them too.  I hope Jackson Nash gets his own story really soon too.
Posted by Janine at 7:28 AM