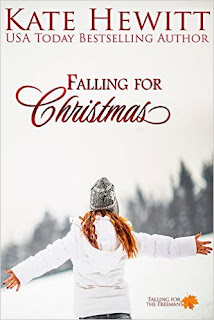 Glamorous city girl Hannah Ford wasn’t thinking when she walked out of a Christmas party and drove three hundred miles into a snowstorm; she just needed to escape. Thankfully local carpenter Sam Taylor comes to her rescue, and the unlikely pair are forced to spend a snowed-in Christmas together.

All Sam planned for Christmas was to get drunk alone. The holiday has always been something to be endured, until Hannah tumbles into his life, making it magical. Now Hannah and Sam have a chance to have a Christmas together… and make it the best one either of them have ever had.

But can one night out of reality turn into something that’s lasting and real?

They were just two strangers spending Christmas together under unusual circumstances.

Stranded in the tiny town and staying in a stranger's house was not how Hannah Ford saw her Christmas escape.  She left a Christmas party after her ex-fiancé showed up with his new girlfriend.  Hannah had to get away.  She didn’t want to spend Christmas in New York City.  She just got in her car and drove.  A few hours later, she loses control of her car close to the town of Creighton Falls.

Sam Taylor was on his way home when he came across Hannah on the side of the road.   With the blizzard, there was no way to get Hannah's car towed and there was no place for her to stay with the B&B closed.  So Sam offered Hannah a room at his house.  Hannah didn't expect to spend Christmas with a stranger.  She didn't plan on having a fling with him either.  But it happened and it changed both of their lives.  Will Hannah and Sam find a way to be together once the snow clears and she is on her way back to the city?

I found the chemistry between Hannah and Sam to be very strong.  They were total opposites, but they brought out the best in each other.  I did find the fact that someone would get in their car in December in New York and just drive without checking a weather report a little hard to believe.  But, in books anything goes and it made a good story.
Posted by Janine at 8:53 AM