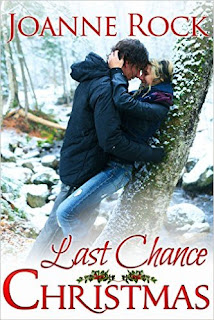 
Fashion buyer Shea Walker had a fast track lifestyle until a car accident sidelines her
to a painful recovery. Seeking quiet for the holidays, Shea returns to the
snowy mountains where she grew up to make peace with her past and spend time
with her estranged family. She never expected J.C. Royce--now a hockey
star--would return to their hometown, too. Determined to avoid that particular
sexy mistake, she's caught off guard when her first night in town brings them
face to face.

Seeing Shea practically fall at his feet is gratifying, until J.C. realizes his proud
former friend, who he once thought would become a whole lot more, is truly
hurt--and in more ways than she lets on. Lucky for Shea, he's got a big house
just sitting empty and a tree ready to decorate, as she is in no shape to stay
by herself. With his bad boy arrogance down to an art form after eight years in
the NHL, J.C. is more than a match for feisty Shea. Especially when it comes to
her outrageous claim that there was never any chemistry between them...

But when it comes to convincing her to stick around town until the New Year, he
just might need a Christmas miracle.
My Review:


Shea Walker hasn’t had the best of luck lately.  She is still recovering from a car accident and she recently lost her job.  She hasn’t spent Christmas with her parents in a while, so she decides to make the long drive from New York City to Cloud Spin Vermont to surprise them.  But the surprise is on her.  When Shea arrives, she finds the house dark, no Christmas decorations and no one there to welcome her with open arms.

Professional hockey player JC Royce is surprised when he finds Shea at her parents’ house while he is working on the ice rink on their property.  What is she doing there when her parents have gone to Hawaii for Christmas?   JC isn’t going to let Shea get away from him this time.  They both have unfinished business with each other.  So, JC keeps it a secret that he doesn’t have the key to her parents’ house in order to get Shea to stay with him.

The reunion is going great between Shea and JC until Shea finds out JC withheld the fact that he had a key to her parents’ house and she could have been staying there.  Will Shea let this small deception ruin what they have gained over the last couple days; especially when she is making plans to move back home and open a store?  How far will JC go to keep Shea in his life this time?

I was pulled into this story from the start.  I really liked JC and Shea and the descriptions of the town of Cloud Spin were easy to picture.  There were small areas with different characters, but not so many to take attention off the main characters.  I like that fact because sometimes authors have so many characters it’s hard to keep everyone straight.  I would love to read more books like this.
Posted by Janine at 8:19 AM