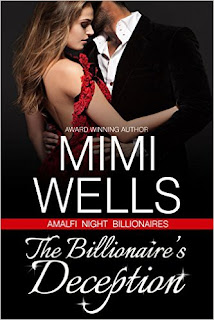 After quitting her first “real” job, Janine Pike takes off for Europe, saving an excursion to the famed Isola del Sole for last. But when her travel-mates sail off with her backpack, phone, and passport after a night of partying, she’s left only with the euros in her pocket and the faint hope that her estranged half-sister, who works at the renowned Hotel Dei Fiori Isola del Sole, might help her.

Shel Myerson, amateur racecar driver and wildly successful TV mogul, oozes wealth and prestige. What he doesn’t have much of is privacy, thanks to a recent and ugly public breakup. What he doesn’t expect is to be mistaken as an employee by a very pretty—and very broke—Janine, the one person in Europe who also doesn’t have any idea who he is.

Shel and Janine discover their chemistry is combustible—but will their budding relationship survive the heat once the press catches on?

A fun European vacation turns bad when Janine Pike wakes up on a beach at Isola del Sole where her and her friends had been partying the night before.  Her friends had left her there not knowing her possessions where still on the boat.  Janine planned to meet her half-sister Stephanie Harlan at Hotel del Fiori Isola del Sole where she works.  Now Janine is expected to pay the bar bill from the night before.  With no money or even a change of clothes, how will Janine’s first meeting with Stephanie go?

Shel Myerson recently went through a tough breakup.  He was visiting his friend Rocco at Hotel del Fiori Isola del Sole for a break.  When he meets Janine, he convinces the hotel staff to treat him as if he is an employee.  He doesn’t want Janine to know he is famous celebrity.  He just wants to help her and be her friend.  Shel and Janine become more than friends pretty quick.  When their new romance is threatened, how will Shel convince Janine how much he cares about her?

This novella was very well written with interesting characters and a story that keeps you hanging on to the very end.

Of course the heroine being named Janine really made me smile.