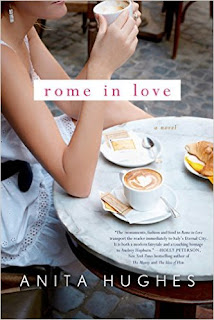 
When Amelia Tate is cast to play the Audrey Hepburn role in a remake of Roman Holiday, she feels as if all her dreams have come true. She has a handsome boyfriend, is portraying her idol in a major motion picture, and gets to live in beautiful, Italian city of Rome for the next two months.

Once there, she befriends a young woman named Sophie with whom she begins to explore the city. Together, they discover all the amazing riches that Rome has to offer. But when Amelia's boyfriend breaks up with her over her acting career, her perfect world begins to crumble.

While moping in her hotel suite, Amelia discovers a stack of letters written by Audrey Hepburn that start to put her own life into perspective. Then, she meets Philip, a handsome journalist who is under the impression that she is a hotel maid, and it appears as if things are finally looking up. The problem is she can never find the right time to tell Philip her true identity. Not to mention that Philip has a few secrets of his own. Can Amelia finally have both the career and love that she's always wanted, or will she be forced to choose again?

With her sensory descriptions of the beautiful sites, decadent food, and high fashion of Rome, Hughes draws readers into this fast-paced and superbly written novel. Rome in Love will capture the hearts of readers everywhere.


This book has it all, memorable characters, a beautiful setting, friendships and love.  Lots of talk of food and fashion didn’t hurt either.  The story is a glorious escape.  It will stay on your mind for a long time.

Actress Amelia Tate gets the role of a lifetime starring in the remake of Roman Holiday.  Playing Audrey Hepburn’s part will be a big step in her acting career.  But it is putting a strain on her love life.  Her fiancé wants her to settle down with him, get a real job and quit acting.  Amelia loves acting, so she follows her heart and goes to Rome to film to movie.

While in Rome, Amelia has many adventures with her newly found friend, Princess Sophia and falls in love with Philip, a journalist.  Amelia leads Philip to believe she is just a maid at the hotel where she is staying.  Philip isn’t completely honest with Amelia either.   How can a romance started with lies work out?

Amelia also discovers she is staying in the very same suite where Audrey Hepburn stayed while she was filming Roman Holiday.  She discovers a stack of letter written by the star and spends her days and nights reading them and discovers many secrets about one of her favorite actresses.

There are so many great moments in this book.  I loved it and I know I will be reading it again soon.