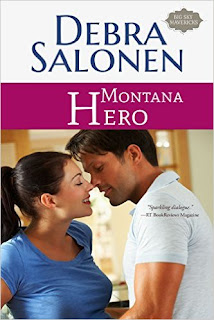 During Flynn Bensen's last wildfire rescue, a woman died despite Flynn's best efforts to save her. He can’t escape his sense of failure or recurring nightmares, but he can escape to Marietta, Montana, to a new job as the head of Crawford County Search and Rescue. When he meets his scorching hot co-worker on his first day, Flynn feels like he might have just jumped from one wild fire to another that threatens to burn out of control despite his determination to keep a safe distance.

Outspoken, direct, and ambitious Kat Robinson isn’t thrilled to have a new boss—after all, if the timing had been different, she’d have been a shoe-in for Flynn’s job. But a single mom of a ten-year-old son knows where her priorities lay—with Brady, the light of her life. No way is she looking for a relationship and co-workers are always off limits. Too bad Flynn’s so darn hot, gorgeous, kind and authentic.

Will Flynn be the hero Kat needs to help her find the courage to fall in love again?


Flynn Benson had no idea moving to Montana would change his life so much.  All he wanted was a change of scenery and a chance to forget the woman he couldn’t save from a wildfire.  Heading Crawford County Search & Rescue would be the perfect position for him.  He could still be involved with what he loves, but with a change of scenery.

Flynn had given up on women after his last marriage.  He just didn’t trust them anymore.  That was until he met one of his employees, Katherine “Kat” Robinson.  She would be worth taking a chance on.  But he knew not to get involved with an employee.

Kat is a single mother raising her son Brady on her own.  Kat decided to move to Marietta because before her mother died, she said it was the only place where she was happy.  Maybe Kat would be happy there too.  Plus it might give her a chance to figure out who her father is.

Kat is instantly attracted to Flynn, but knows workplace romances don’t work out.  Will Kat and Flynn be able to keep it business only or will they give into their feelings?

There is a lot more to this story than I can tell without giving it all away.  One part had me biting my nails in anticipation of what would happen.  The chemistry was really strong between the lead characters too.  I also enjoyed catching up with some of the characters from previous Big Sky Mavericks Books.