Review: Torn (All Torn Up #1) by Carian Cole 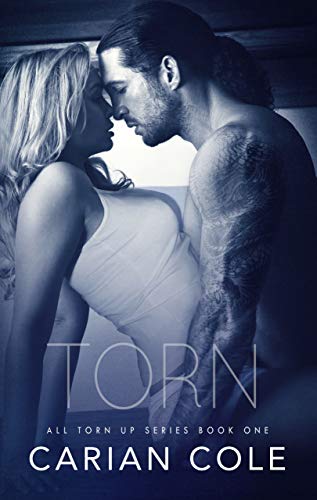 When I was five years old I told Toren Grace I was going to marry him when I grew up.

When I turned eighteen I made it clear I still felt the same. The problem? He's fifteen years older than me and he's my father's best friend.

Toren Grace. My father's best friend. My pseudo-uncle.
He's always been my rock. The one I should never, ever want.
But I do want him, and I love him.
I always have.

He loves me too.

Tor's one of the good guys. Loving. Devoted. A strong moral compass. One kiss between us rocked him clear off his axis. Now we can't forget how that kiss felt, and what it changed. Nothing will ever be the same between us.

I know he's struggling with his feelings, but I'm determined. I'm not a little girl anymore, and we can't deny we were meant to be together. The heart wants what the heart wants, and it doesn't care about age or how we met. My father cares, though. And he's the one person neither one of us can stand to hurt.

We're all being torn apart, and I don't know how to make everyone see that the wrongs are actually right.

Toren Grace helped raise Kenzi Valentine since she was a baby.  He was her father's best friend.  Kenzie and Tor became best friends as they got older.  But when Kenzie turned eighteen, that friendship took a different turn.  She started to fall in love with Tor and was willing to do anything to be with him even when he tried to push her away.  Tor knew a relationship with Kenzie was wrong and he fought with himself and his jumbled-up feelings until he no longer could.  Fate brought them together and nothing was going tear them apart.

I cried and cheered and went through every emotion while reading this book.  It is a forbidden love story that I just couldn’t get enough of.  I like how the story would slip back in time to show how Toren and Kenzie's relationship grew over the years.  It really showcased the depth of emotion between them.  I highly recommend this age gap romance.