Review: Tied (All Torn Up #2) by Carian Cole 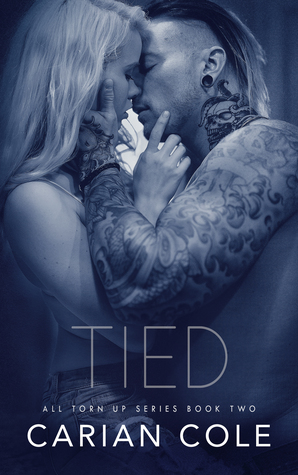 Tyler Grace was many things.
A killer. A myth. An outcast. A hero.
My prince.


My childhood and innocence were stolen when I was kidnapped at five years old. For eleven years I clung to my childhood fairytale books, waiting for the prince I hoped would someday save me and carry me off to a happily ever after.

I had no idea my savior would come in the form of a scarred recluse, covered in tattoo's, who can't--or won't--speak a word.

But the moment our eyes met I knew he was the one. My prince.

Tyler Grace is haunted by his tragic past and he's sentenced himself to a lifetime of solitude in the woods. He's as lost in society as I am; scarred just as much on the inside as the outside. Just like me.

He saved my life that day he found me and killed my captor with his bare hands. I was warned to stay away from him. But I can't stop thinking about him. I ache to hear his voice and see him smile. And I want nothing more than to be the one to break through his walls.

I think he's the only one who can break through mine, too.

Together we can have love, happiness, and a closeness that once felt impossible to have. But can we overcome the horrible twisted past that ties us together?

An amazing story of love and survival.

You never know just how your prince will show up.  Will he be riding a white horse like in a fairy tale?  In Holly’s case, her prince rescued her from the man who kidnapped and held her captive for eleven years.  Tyler was scarred, physically and emotionally.  He had a love for animals and nature; people, not so much.  He had a heart of gold, but it would take someone very special to help him shine.  Holly was just what he needed.  It just took some time for him to figure it out.  Two years after her rescue, Holly still dealt with low self esteem and anxiety from what she went though during her captive years.  The only person who truly understood how she felt was Tyler.  Holly and Tyler help each other heal and learn to trust and love again, but it was a process with many setbacks.

When I came to the end of this book, I was like “nooooo”, it can’t be over already.  I wasn’t ready to say goodbye to these characters.  They felt so real and I became attached to them.  Their story totally blew me away.  It was heart-wrenching and beautiful at the same time.