Review: A Family for Christmas (The Burlesons of Texas Book 2) by Nola Cross 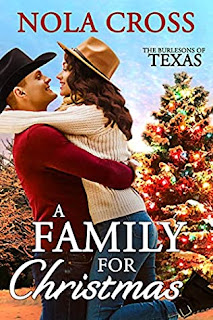 He never thought he’d have a real family Christmas…

For the past eight years, Bill Smith has been unable to set down roots. But he never forgot the magical night he spent with an auburn-haired beauty in Last Stand, Texas. When she finally tracked him down, he was more than happy to donate a kidney to AJ, the son he never knew he had. But now that AJ is better, Bill wants more time with him and his mother. He wants a family.

Annie Burleson can’t help but be grateful to this almost-stranger for saving AJ’s life. Still, she’s a little wary. AJ has already been through so much—what if Bill leaves again? And with Christmas in full swing, it’s difficult to discern which emotions are festive and which are forever.

As Annie and Bill’s lives collide, their mutual love for AJ makes this more than a marriage of convenience. But is it enough to give them the family Christmas they all deserve?

From marriage of convenience to happily ever after.

Annie Burleson and Bill Smith had a fling eight years ago and their son, AJ was the result of it.  Annie kept AJ a secret from Bill until AJ needed a kidney transplant.  But after the procedure was over, Annie didn’t hear from Bill until months later when he showed up at Burleson Ranch.

Bill was willing to do anything to spend time with AJ, including marrying Annie, after she sprung the question on him.  He just wanted to be the father AJ deserved.  Little did Annie and Bill realize the fake marriage would soon lead them to the family they all deserved.

With great characters, setting, and a wonderful story line, I was easily hooked on this story.  This book is part of a series and I would recommend reading the first one, The Cowboy Comes Undone, first so you can really get to know the characters better.