Review: The Runaway Montana Bride (The Starr Brothers of Montana #4) by Joan Kilby 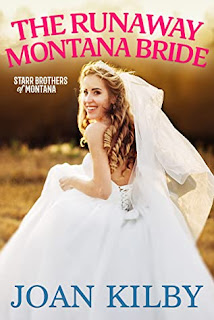 When lifestyle “it” girl Lilou Langdon dumps her wealthy, snobby fiancé days before their highly-promoted society wedding, she can’t get out of Manhattan fast enough. Desperate to escape, she begs her magazine editor for the first assignment out of town. With her designer luggage and pup in a purse, Lilou—who specializes in covering luxury resorts and glamorous travel destinations—arrives in Montana for a six day trek into the wilderness.

Adventure tour owner Garrett Starr was expecting an experienced, off-grid journalist to cover his wilderness trek. Instead he gets Lilou, a city-slicker ‘princess’ who doesn’t know a crampon from a crouton. Worst of all, she brings along her lion-haired Pomeranian, Simba. Garrett dreamed that the article would boost his business to the next level, yet Lilou appears to be his worst nightmare.

But Lilou didn’t make a name for herself by giving up, and soon both she and Garrett realize they’re in for more than they bargained for.

Lilou and Garrett are complete opposites of each other.  Lilou is a city girl; a social media Influencer and travel blogger.   Garrett is country boy through and through.  He owns a store and just started a hiking adventure tour.  They are thrown together when Lilou suddenly calls off her wedding and just needs to get out of New York City.  Her boss had a job in Montana where she could write a feature on Garrett and his new tour.  Lilou had no idea what she was getting into.  Hiking, mountain climbing and whitewater rafting are just the start of it.  And, Lilou just happened to bring her little dog along for the trip.  What could go wrong?

I enjoyed this book a lot.  The story was fun and played out well.  I wasn’t sure how Lilou and Garrett would end up together with them being so different from each other, but the author did a great job finding a middle ground for them.  The story flowed easily with many situations that could have gone bad, but ending up working out.  I enjoyed seeing the transformation of Lilou when she started to enjoy her wilderness adventure.  All around, this was a fun and cute story.