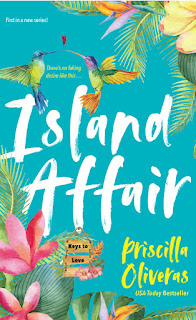 Sought-after social media influencer Sara Vance, in recovery from an eating disorder, is coming into her own, with a potential career expansion on the horizon. Despite the good news, her successful siblings (and their perfect spouses) have a way of making her feel like the odd one out. So, when her unreliable boyfriend is a no-show for a Florida family vacation, Sara recruits Luis Navarro—a firefighter paramedic and dive captain willing to play the part of her smitten fiancé . . .

Luis’s big Cuban familia has been in Key West for generations, and his quiet strength feeds off the island’s laidback style. Though guarded after a deep betrayal, he’ll always help someone in need—especially a spunky beauty with a surprising knowledge of Spanish curse words. Soon, he and Sara have memorized their “how we met” story and are immersed in family dinners, bike tours, private snorkeling trips . . . sharing secrets, and slow, melting kisses. But when it’s time for Sara to return home, will their fake relationship fade like the stunning sunset . . . or blossom into something beautiful?

Fun, sweet, sexy and romantic.  This book gave me everything I want from a romance story.

Luis Navarro, a firefighter in Key West, gets himself in quite a predicament.  He is known by his family and friends as San Navarro.  He can never do wrong.  But his nickname is challenged when he meets Sara Vance, a social media influenster, who is vacationing with her family and was supposed to be introducing her boyfriend to everyone.  Sara has always felt like a failure compared to her siblings, so she wanted to impress everyone with her new boyfriend.  When Luis overheard the conversation between Sara and Ric and then Sara breaking up with Ric, he decided to play the part of the boyfriend.  What could go wrong?  Apparently, it’s hard to keep a secret from a big Cuban family and the islanders who know everyone and their everything.

This book was such a great read.  I was totally got into Luis’s family.  They were close and I enjoyed the banter between him and his siblings.  Sara’s family had a lot of drama and things that needed to be worked through and as the story went along, it became emotional in some scenes as secrets were revealed.  I wanted Sara and Luis to be together from the very start.  Even thought they were so different, they seemed to bring out the best in each other.  They were a fun couple.  And Luis was totally swoon-worthy.  After reading Sara’s description of him reminding her of Vin Diesel, I actually read his parts in Vin’s voice.  This is the start of a new series and I can’t wait to read the next book.  I would recommend this book to anyone who loves rom-coms.