Review: The Price of a Dangerous Passion (Harlequin Presents) by Jane Porter 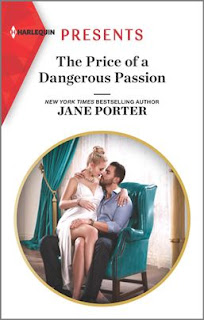 When business and pleasure collide
The consequences are life changing…
Powerful tycoon Brando Ricci cannot imagine raising his child anywhere but in Tuscany, surrounded by family. So when PR executive Charlotte Parks shows up at his door and tells him she’s pregnant, he has the only solution. They must marry pronto.

Charlotte already broke her biggest rule by giving in to temptation with Brando. He’s a former client—and impossibly skilled in bed! But a marriage of duty? No, thank you. Unless Brando can break his own number one rule: keeping his heart off-limits.

Passionate and intense.  I couldn’t put this book down.

Charlotte never mixed business with pleasure until she met Brando, an Italian millionaire with the reputation of a playboy.  All she wanted was one night with him and then she would leave Italy and head back to the US where she lived.  It was New Year’s Eve after all.  Time to let loose a bit.  What Charlotte never expected was to become pregnant from their brief encounter.  When Charlotte tells Brando he is going to be a father, she never expected the response she got from him.  Brando wanted to get married and raise the baby together.  Could a marriage even work with two strong-willed people who already had their life plans rolling in motion?

This book swept me away.  It was what I have come to expect from a Jane Porter Harlequin romance.  An exotic location and strong characters who knew what they wanted, but got thrown a curve ball.  It was fun to watch each scene play out while I was waiting to see how they would get their happily ever after.  There was a lot of push and pull between the characters and a roller coaster ride of emotions for me as I read the book.  In the end, I hated to say goodbye to Charlotte and Brando.  I became emotionally attached to them.  Once they gave into each other, they were the perfect couple.
Posted by Janine at 4:00 AM