Review: A Crime of Fashion (The Wedding Bell Mysteries #2) by Nancy Robards Thompson 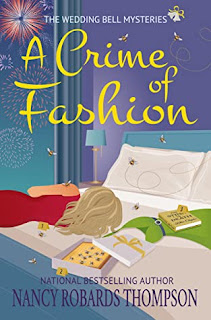 When a murder mystery-themed fashion show is struck by a real murder, there are enough suspects to line the runway

Kellen’s death, which has been staged to mimic a murder from the book that launched her career, leaves the whole town reeling. The violence feels shockingly personal—Kellen was a founding member of the local writing group, Hemlock Homicide Heroines, before success swept her away to the big city.

Soon, it becomes clear not everyone was thrilled with Kellen’s success. As suspects multiply faster than designer knockoffs, Maddie and Jenna are determined to figure out who was resentful enough to kill over it.

What was supposed to be a fun get together between Maddie Bell and her mystery writer friends, turns into a hunt for a killer, when one of the friends is found dead in her hotel room on her first day in town.

I was hooked on this story from the very start.  The author did a great job with the plot and the character backgrounds.  Several of the characters showed motive to commit the crime, but I still couldn’t figure out who it was until the killer was revealed.  This book ends with another surprise that I never saw coming.  I can't wait to get my hands on the next book in this series.  Even though this book is part of a series, it can be read as a stand-alone.
Posted by Janine at 4:00 AM