Review: How Lulu Lost Her Mind by Rachel Gibson 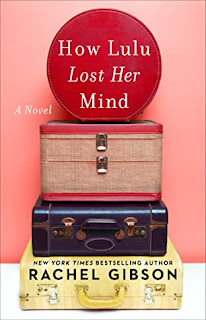 Lou Ann Hunter’s mother, Patricia, has always had a passionate nature, which explains why she’s been married and divorced five times and spooned enough male patients to be ousted from three elderly care facilities. She also has Alzheimer’s, which is why she wants to spend the rest of her life surrounded by childhood memories at Sutton Hall, her family’s decrepit plantation home in Louisiana.

Lou Ann, a.k.a. Lulu the Love Guru, has built an empire preaching sex, love, and relationship advice to the women of America—mostly by defying the example her mother has set for her. But with Patricia suddenly in need of a fulltime caretaker, Lou Ann reluctantly agrees to step out of the spotlight and indulge her mother’s wishes, even if it means trading in her Louboutins and Chanel N°5 for boots and mosquito repellant.

Upon her arrival at Sutton Hall, Lou Ann discovers that very little functions as it should—least of all Patricia’s mind. And as she adjusts to this new and inevitably temporary dynamic with the help of a local handyman and a live-in nurse, she is forced to confront the reality that neither her nor her mother’s future is going according to plan.

Lou Ann Hunter, also known as Lulu the Love Guru, put her career on hold to care for her mother who has Alzheimer's.  She never expected to find herself back in Louisiana and living in her ancestral home, Sutton Hall.  But it was where her mother wanted to spend her final days.

As the story unfolds, Lou Ann finds herself discovering more about her mother and family which leads to some interesting tales embedded in the book.  Lou Ann also discovers friendships, and even a love interest, that she never expected.  Maybe moving to Louisiana wasn't such a bad idea after all.

I was pleasantly surprised by this book.  I had a hard time putting it down.  I need more of these characters.  I wasn’t ready to say goodbye to them yet.   What could have been a sad and complicated story about an Alzheimer’s patient became much more.  It was emotional in some parts.  There were witty parts, fun and joyful parts and so much more making this a memorable story.

Thank you to Gallery Books and NetGalley for the ARC of this book in exchange for an honest review.
Posted by Janine at 4:00 AM