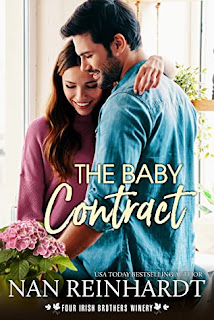 Firefighter and paramedic Tierney Ashton has always been a bold adventurer, but at thirty-four she longs to embark on a new adventure—motherhood. But who will be the father? Although financially challenging, a sperm bank appears to be her best option. That is, until she shares her dream with her long-time pal, Brendan Flaherty.

Government analyst and world traveler Brendan Flaherty returns home to River’s Edge to help out at his family’s thriving winery and his brother’s new community theater. He also plans to finally achieve his lifelong goal of writing a novel. But when Tierney shares her wish, Bren offers to be her baby daddy—with one condition. Marriage.

It seems like a perfect contract, but will love get in the way?

She wants a baby.  He wants a wife.

Tierney Ashton and Brendan Flaherty have been friends since they were kids, but never thought about each other romantically, even when they were older.  When Tierney decides she wants a baby and plans to use artificial insemination, Brendan decides he will be the donor.  But Brendan wants to marry Tierney and raise the child together.  So, a contract is made and a quickie wedding by the justice of the peace is done.  Next up, baby making.  Will the plan fizzle out and ruin their friendship or take it in an entirely different direction?

I enjoyed this book quite a bit.  It might be a trope that has been done many times, but the author made this book so much more interesting with the backgrounds of the characters.  There were even some tense moments near the end of the story that had me on the edge of my seat.  This book is a great addition to the Four Irish Brothers Winery series.  I also enjoyed catching up with the other family members and seeing how their relationships had grown.
Posted by Janine at 4:00 AM