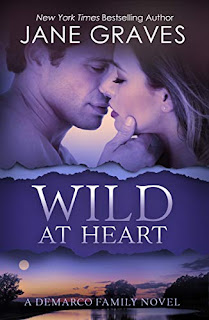 You can run from the past...but you can't hide from love

When private investigator Valerie Parker tails a cheating wife one night, it’s business as usual – until the woman is murdered and the man she’s with becomes the prime suspect. She’s astonished to discover the man’s identity: Alex DeMarco, a man she was once insanely in love with and who shattered her dreams and broke her heart… all in the same day.

As a cop, Alex feels obligated to offer the stranded woman a ride home. When she ends up dead and Val Parker is the one who places him at the scene of the crime, he knows the grudge she holds may affect her testimony and put him behind bars forever. Then her life is threatened, and soon they’re on the run together, working to clear his name and protect her life. Once again, Alex find himself drawn to this wild, impetuous woman from his past, even as every step they take deeper into the Texas Hill Country may be their last.

A fast paced, nail biter of a story.

Five years ago Valerie Parker and Alex DeMarco met at police academy.  Valerie fell hard for Alex from the start.  They spent one incredibly passionate night together, but the next morning Alex was gone.  Then came the big blow; she was dismissed from police academy that day.  Valerie despised Alex ever since, but she never forgot how he made her feel during the time they spent together.

Now, Valerie is working as a private investigator and the woman Valerie is paid to watch is murdered and Alex is the prime suspect.  Tensions rise as Alex and Valerie travel across Texas looking for the real murderer before someone else ends up dead.

This is the second in the DeMarco Family series and just as good as the first.  If the suspense and passion aren’t enough to pull you in, trying to figure out who the killer is definitely will.  I enjoyed this book as much as the first and I will anxiously be waiting for the next one.  Even though this is part of a series, there is no cliff hanger and each book can be read as a stand-alone.