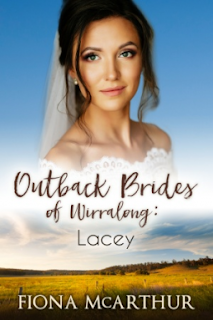 Lacey Jerome had always fought her attraction to sexy police officer Cameron James, but one crazy night, she let her hair down and fell into bed with him. Their night together turned more passionate, more soul-scorching than she’d imagined it could be, but mixed messages from Cameron had her fleeing the scene.

Now, she's back in Wirralong with the memories of their one-night stand etched into her mind and a mission to reconnect with the man who made her lose her head in the most delicious manner.

Cameron never forgot Lacey -- and not for lack of trying. He has his own restrictive code, but somehow his thoughts always manage to wander to the newly returned beauty. He has questions and Lacey knows all the answers.

Set in the Australian Outback, in the town of Wirralong, where weddings and happily ever afters have become the trend, one couple discovers the consequences of their one night stand.  Will the love of their baby be enough to bring them together?

Lacey is enjoying a wedding with her friends, on the night her divorce is final, when Wirralong’s hottest police officer sits beside her.  Lacey gives in to Cameron’s flirtations and she soon finds herself spending the night with him at his house.  When Lacey returns to Perth to collect her belongings and wrap up the sale of the house, she discovers she is pregnant.  Lacey doesn’t return to Wirralong until she is eight months pregnant.  She soon finds herself in early labor with Cameron rushing her to the hospital.  But, they are too late and Lacey ends up giving birth on the side of the road with Cameron right there helping her through it.  Lacey wasn’t ready to disclose the identity of her baby’s father, but Cameron figures it out when he sees baby Ethan has a birthmark that is identical to his own.

Cameron is a dedicated bachelor.  He doesn’t plan on getting married or ever having children.  But when he discovers he is Ethan’s father, he starts to have a change of heart.  Now, Cameron has to convince Lacey that they will make a good couple and he can be a good husband and father.

This was a fun and emotional book to read.  It was short, but lots of details were packed into the pages.