Review: Taming the Troublemaker (The Hills of Texas Book 3) by Kadie Scott 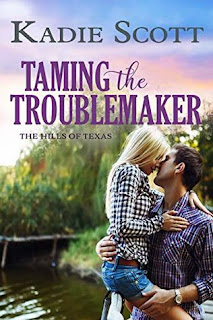 One daring kiss with the playboy tempts the good girl, but can she tame him?

Autry Hill may be a cowboy to his boots, but he’s also gained quite the reputation as a charmer and playboy. His parents aren’t sure he’s ready to take the reins of the family’s prosperous Texas ranch, so they set up a challenge: No women or scandal for the next six months and the ranch house he grew up in is his. Easy peasy, Autry thinks. He’s already tired of late nights and romancing, until elementary school teacher Beth Cooper happens to cross his path. Suddenly Autry is losing his heart, his mind, and what’s left of his reputation.

Good girl teacher Beth Cooper is far too practical to fall for Autry Hill, even if she had a crush on him way back when. The man’s been breaking hearts since middle school. But when he becomes her unexpected champion and then they work together to help one of Beth’s troubled students who’s about to lose everything, she sees a different side of Autry – serious, compassionate, determined and dedicated. And that Autry is nearly impossible to resist. Does she need to?

A teacher, a cowboy with a bad reputation, and a little boy who steals everyone’s heart, made this an unforgettable story.

Beth Cooper and Autry Hill lived in the same town but weren’t friends.  Beth knew Autry was the town bad boy and kept away from him.  But, fate had another idea in mind, one that brings them together in a way neither expected.  It turned out Beth had a little boy in her class, Dylan, who needed a male figure in his life.  After Autry is arrested for fighting and given community service, Beth suggests he become a big brother for Dylan.  Their love for Dylan brings Beth and Autry together and both of their lives are changed forever.

This was such a good book.  I didn’t want it to end.  The story was easy to follow along with and I really liked the characters and author’s writing style.  There were so many great scenes.  I laughed so hard during the skunk scene and then Autry fighting with Beth’s neighbor in the middle of the street, in the rain, wearing nothing but his underwear.  They were comical, but crucial parts of the story.  The scenes with Dylan were sweet and inspirational.  The chemistry between Beth and Autry is off the chart once they give in to their growing attraction.  I would definitely recommend this book to any romance fan.