Review: Doctor's Orders (The Moore Sisters of Montana, #3) by Ann B. Harrison 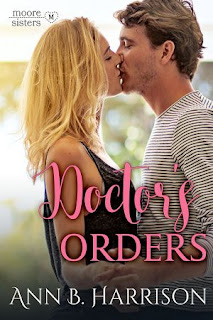 April Moore has always been an impulsive dreamer. So when she shows up in Cherry Lake, announcing that she’s there to stay and start her own business–a design studio florist shop–her sisters are pleased, but more than a little skeptical. A lot more than pride is riding on her new business adventure, and April doesn’t have time to get distracted, especially not by the handsome doctor who shares office space with her. Unfortunately, April’s never been one to keep her head down and opinions to herself, and she’s barely opened for business before she thinks her first design project should involve the quiet man next door doing his best to ignore her bubbly attempts at friendship.

For someone so young, Dr David Morrison is firmly set in his ways. He’s returned to Cherry Lake temporarily to take over his father’s family practice until he can sell it and return to Seattle to rebuild his life and career. He’s always played it safe and isn’t looking for change, fireworks, or romance. Unfortunately, the vivacious April embodies all three. Each meeting is like touching a live wire, and David finds himself entranced.

Opposites attract, but can they find a happy ever after?

The third installment of The Moore Sisters of Montana brings the free spirited, April, the youngest of the Moore sisters.  She returns to Cherry Lake to be near her sisters and open a design studio florist shop.  But no one thinks she will stick around for long.  Focusing on her shop, she definitely didn’t need a distraction like falling in love.

Dr. David Morrison is a straight laced doctor who has returned to Cherry Lake to temporarily take over his father’s practice.  He plans to sell it as soon as he can and return to Seattle to rebuild his career.  He didn’t plan on finding love in Cherry Lake, but there was something about April that kept calling to him even though she is totally opposite of the women he is usually attracted to.

This is a sweet opposites attract romance with characters and a story that you just can’t get enough of.  It is a great addition to the series.