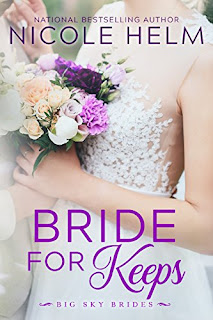 They all said it wouldn’t last….

Sierra McArthur never could have imagined they were right, but ever since her husband’s world was rocked by a family secret, it’s clear that their happily ever after isn’t to be. But one last night of passion with her husband creates a lasting consequence neither of them planned on….

Carter McArthur doesn’t want a divorce. But he doesn’t know how to fix all the mistakes he’s made in the wake of his family’s betrayal. But when a surprise pregnancy gives them one last chance at forever, Carter is determined to make her understand, she’s not his bride by accident. She’s his bride for keeps.

When a family secret comes out, Carter McArthur shuts down.  He won’t even want to talk to his wife, Sienna, even though they live in the same house.  In a last ditch effort, Sienna tries to revive their relationship with a night of passion, only to wake up and find Carter gone.  That’s when she realizes it is over and wants a divorce.  When Sienna finds out they created a baby that night, she decides she will raise it on her own.

Carter never intended to hurt Sienna.  He just didn’t know how to control his emotions.  Carter was raised in a family where everything always had to be perfect.  He thought keeping his feelings to himself was the right thing to do.  Obviously, he was wrong.  When he finds out Sienna is pregnant and wants a divorce, he decides he will do anything to win her back.

This was an emotional story and at times had me tearing up.  Like many young people, Carter and Sienna thought marriage would be fun and easy and didn’t realize there would also be difficult times that they would need to work through.  The author did a great job writing a story with real life situations and solutions.  I liked Sienna and Carter and couldn’t wait to see how they patched up their marriage.

My favorite quote in the book:
“Love is showing each other your cracks.  Maybe more than that, maybe it’s trusting each other with your flaws.  Your imperfections.”