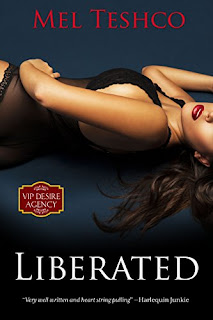 Eloise Chand isn’t just any woman, she’s also Savannah, stunning call girl. But it doesn’t stop unprofessional thoughts about her favorite clients, Saxon and Julian. She knows she’s in trouble. She doesn’t want her career destroyed by personal attraction. She’s a business woman first and foremost, and the Wolfe brothers aren’t part of her career plan.

Adopted brothers, Saxon and Julian, share more than just their billion dollar real estate development business. But never in their wildest dreams did they expect to fall for the same call girl. She’s a woman whose hot-blooded sexuality and independence stirs something deep in them both. That she’s beyond willing to share the same bed with them is just a bonus they want to further explore.

But how do they permanently attain the one woman who just might be unattainable?


This is not your mother’s romance!

Eloise Chand escaped an abusive arranged marriage in Napal years ago.  Now she is one of the most popular call girls at the VIP Desire Agency and goes by the name Savannah.  Recently, Eloise has been having trouble keeping a couple of her clients off her mind.  Normally, when she leaves her customers, she has no problem moving onto the next.  But the Wolfe Brothers, Julian and Saxon, have gotten into her head and she can’t quit thinking about them.

Self-made billionaires, Julian and Saxon, have both fallen in love with Savannah and they will do anything to have her as their own.  They just need to convince her how much they really want her.  But their love does come with a cost.  Savannah will have to give up her career, and she has no plans on doing that.  How far with Julian and Saxon go to get their way?

This book is not your typical romance.  For starters, there are two men as the love interest and some very steamy scenes.  But the story is well written and the characters are some that you will be cheering on all the way through the book.  Although the ending was easy to predict, I still enjoyed reading this book and there were some surprises.  I have read all of the books in the series and this one is now my favorite of them.