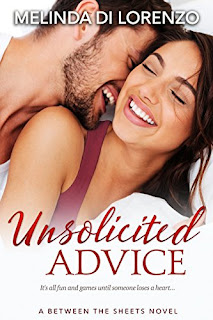 Heidi Bluthe is Miss Anonymous—queen of a confident, snark-laced advice column. Too bad she can’t take her own advice to fix the hot mess reality of her life. When one of her readers shows up claiming her advice ruined his life and demands she fix it, Heidi agrees to try. She is, after all, a professional and helping him will help further her career. But what happens next, falling hard for sexy British charmer, William, really knocks them both for a loop.

A year ago, William Rutherford was living the dream. Beautiful fiancée. Perfect home in the suburbs. All that changed in an instant. And the advice Miss Anonymous—aka, Heidi Bluthe–gave might not have been the root cause, but it was certainly the shove that sent things over the edge. William’s determined to have her set things right, even if that means unexpectedly risking his heart in the process…

Heidi Bluthe is an advice columnist who suffers from anxiety.  She gave advice to a reader, William Rutherford, who claims she ruined his life when he showed up at her house wanting payback.  But it’s not the kind of payback you would think.  He wants Heidi to go with him on a road trip to Las Vegas where he participates in things on his ex’s bucket list along the way.  Throughout this crazy adventure, Heidi suffers from panic attacks and William is there to help her through them.  He also gets her to come out of her shell too and learn to live again.

I laughed through most of this book.  It was a comical story with Heidi finding herself in so many unusual situations.  But there were also emotional parts in the book which made me feel a connection to the characters.  It is an all-around fun feel good story with lots of laughs.

My favorite quote in the book:
“Luv. You took a four-day road trip with a man you found in your back garden in his underwear. Four days after that you let him move into your house. Of course I think you’re crazy.”
Posted by Janine at 8:18 AM