Review: Talk to the Paw by Melinda Metz 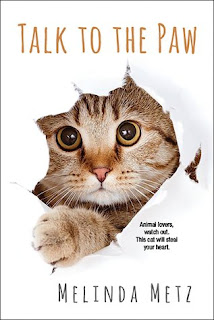 Inspired by the true story of a Portland, Oregon, cat who stole from his neighbors—and stole America’s hearts…

SHE’S PUTTING HER LOVE LIFE ON PAWS
Jamie Snyder is thirty-four and single but NOT ready to mingle. After suffering through The Year of the Non-Commital Man, The Year of the Self-Absorbed Man, and The Year of the Forgot-to-Mention-I’m-Married Man, Jamie’s ready to celebrate The Year of Me—and MacGyver, of course. MacGyver is an adorable tabby with a not-so-adorable habit of sneaking out at night and stealing things from the neighbors. That’s right, MacGyver is a cat burglar. He’s still the only male Jamie trusts—and the only companion she needs…

BUT HER CAT HAS OTHER IDEAS
MacGyver knows his human is lonely. He can smell it. It’s the same smell he’s noticed on their neighbor David. David is a handsome young baker who’s tired of his friends trying to fix him up. But now MacGyver’s on the case. First, he steals something from David and stashes it at Jamie’s. Then, he steals something from Jamie and leaves it with David. Before long, the two are swapping stolen goods, trading dating horror stories, and trying not to fall in love. But they’re not fooling MacGyver. When humans generate this much heat, the cat is out of the bag…

Jamie Snyder moved to Los Angeles to discover a new life, one that did not include men or teaching high school history.  She called it “The Year of Me”.  She would try new things and hopefully discover a career that she would love.  The one thing Jamie doesn’t expect was to find out her cat MacGyver has been sneaking out at night.  Mac became a thieving matchmaker for Jamie and several others in the neighborhood.

This is definitely a book for a cat lover.  If you’re not one, you may not get the sense of humor.  I loved reading the parts written in Mac’s point of view.  From a cat’s perspective, things are totally different.  I started looking forward to seeing what new item Mac would steal during his nightly adventures and where they would turn up.  His encounters with a dog named Diogee were fun too.  I laughed at the nickname Bonehead and every time he teased him.  The busy body neighbors were a great addition to the story too.  But, I especially liked how Jamie and David ended up together even though they planned to remain just friends.
Posted by Janine at 5:00 AM