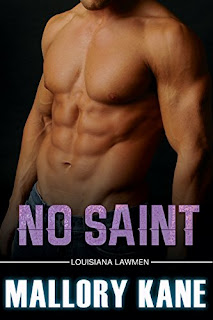 New Orleans Police Detective Rick Easterling is no saint. He's the NOPD's best undercover cop. Known as the Man of a Thousand Faces, he's a rogue–breaking rules to solve cases his way. But when his brother dies of a drug overdose and he’s suspected of being a dirty cop, Rick vows to clear his name and avenge his brother’s death.

Rookie police officer Lusinda Johnson has a personal axe to grind with dirty cops, so she volunteers to work undercover and shadow Rick. She tells herself she can remain immune to his sexy, brooding demeanor, but the longer they work together, the harder it is to see him as anything other than a hero.

As “Sin” and Rick investigate the corrupt underbelly of New Orleans night life, the lies they must tell each other imperil them almost as much as the drug lords closing in. Will they learn to trust each other in time to save themselves and explore their growing love?

This book had me on the edge of my seat and I had trouble putting it down.  I really got into the story.

Detective Rick Easterling and rookie police officer Lusinda Johnston are both working undercover at a bar in New Orleans.  Rick is investigating what the city is calling the Bad Dope Murders, people dying from contaminated heroin.  Sin was recruited by the New Orleans Bureau of Integrity to investigate Rick because he is thought to be a dirty cop and has something to do with the murders.  Even though they both live in the same building and work at the same place, neither knows the other is an undercover cop.  When the truth finally comes out, will they be able to trust each other enough to find the killer?

I found this book to be extremely exciting and even though I kind of figured out who the killer was early in the book, I still enjoyed reading how Sin and Rick were able to bust them.  This is the second in a series, but I found it to be a book you can read on its own.  I would recommend it to anyone who enjoys a good romantic suspense story.