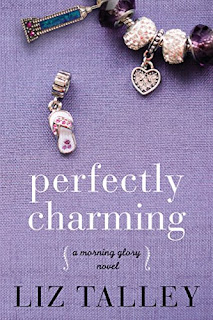 
Morning Glory native Jess Culpepper is desperate to get out of town after divorcing the only man she’s ever dated. She takes a temporary nursing job in Florida and, thanks to the bequest of her late friend, Lacy, has the funds to rent a condo right on the beach. She’s not prepared to literally trip over her old high school lab partner—and definitely not prepared for how deliciously hot he is now.

Ryan Reyes, once known as “The Brain,” has worked hard to become more than the skinny nerd that jocks bullied and girls politely tolerated. At twenty-six, he has retired from science to run a charter fishing business in Pensacola and spend his leisure time catching up on the debauchery he missed. But when the unattainable girl of his teenage fantasies moves in down the beach, old feelings come flooding back.

Their scorching attraction soon leads them into bed—but what starts as no-strings-attached fun is complicated by a return to Morning Glory and the shadows of their shared past. Can the head cheerleader and the geek redefine themselves and forge ahead to find their happily ever after?


Jess Culpepper had always wanted to live at the beach.  So when she is offered a temporary position at a hospital in Florida, she takes it.  It couldn’t have happened at a better time.  It was a year after her divorce and one of her best friends had recently passed away.  She was ready to move on where no one would know her and she could just relax and unwind.  The one thing Jess didn’t expect was for one of her new neighbors to be her old chemistry lab partner from high school, Ryan Reyes, the school nerd.  But Ryan was no longer a nerd.  He had become a real hottie and now all the girls want him.

Ryan had worked had to shed his geeky image and become someone new.  After a lot of soul searching, he left his boring life in California and moved to Florida where he changed his image and bought a boat to charter fishing tours.  No one knew him as Dr. Ryan Reyes, MD, PhD there.  They all thought he was just a cool guy who liked to hang out on the beach and party with his friends.  Everything changed when he saw Jess on the night of his birthday party.  But he thought it was all in his head as he was drunk as a skunk and laying naked on the beach looking up at the stars.  Jess was the girl he had a crush on all through school.  The next day when he found out it really was her and not his mind playing tricks on him, he thought maybe this time he could finally have a chance with her.

I really enjoyed this story.  When I first started reading it, I didn’t know it was book 2 in a series.  I definitely want to go back and read the first book.  In this book, I enjoyed how Jess and Ryan started their lives over even though they both had insecurities, they were able to move past them and find love.  I also liked the friendship story too between Jess and her girlfriends.  It was sad that they lost their friend Lacy, but Lacy seemed to be the one who brought these girls to discover their destinies.  Lacy left a letter to her three best friends, gave them some money and also left them her charm bracelet.  The letter stated that each was to use the money to discover their own happiness and when they did, they were to add a charm to the bracelet and pass it on to the next friend.  It was definitely a feel good type of story.