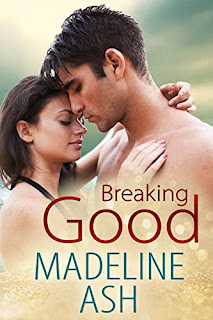 He wasn’t good for her. He never would be.

At eighteen, Stevie Case finally surrendered to her attraction to bad boy Ethan Rafters, sharing one night with him before she graduated and he skipped town on a one-way road to destruction. Years later, Stevie has hit back life’s curveballs and is no stranger to hard work, but when she finds herself working for Ethan, who’s turned his life around, her world shatters not only because their chemistry is still fierce and undeniable but because fate separated them before she could tell him he has a son.

Ethan desperately wants to be a good father and a partner yet he believes he’ll never be normal. The chaos that defines his life has destroyed his relationships, yet Stevie’s acceptance of his flaws tempts him with a life he thought impossible.

Dare he risk Stevie's life of hard-fought stability for his own chance at happiness?

He wasn’t good for her.  He never would be.  But maybe if he really focused, it just might work out.

Stevie Case and Ethan Rafters were total opposites in school but they were still attracted to each other.  The night before Ethan was to leave town, him and Stevie finally got together.  It was the night Stevie's life.  She ended up pregnant.

Eight years later, Stevie and her son Zach are vacationing in Byron Bay.  To help pay for some of the expenses, Stevie answers an ad for a painter.  Little does she know, the house she will be painting in belongs to Ethan.

Ethan never forgot Stevie.  When he hires her, he thought they could just pick up where they left off. Then he finds out Stevie gave birth to his son.  Ethan has no idea how to handle this life changing news.  He doesn't know how to be a father.  But with a little determination, they just might be able to find a way to make it work and become a family.

I enjoyed this reunion story.  The characters felt real and had flaws and insecurities that needed to be overcome.  The book was fact paced and well thought out.  I think any romance fan will enjoy this book.
Posted by Janine at 8:39 AM