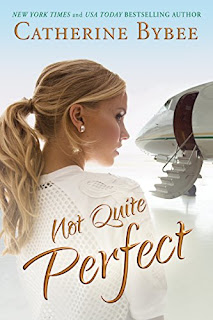 Mary Kildare knows how to read people. It’s both why she makes a great therapist and why she refuses to trust the average bachelor. Staying fiercely independent has been her primary relationship strategy—until wealthy playboy pilot (and commitmentphobe) Glen Fairchild reappears in her life. After a yearlong teasing tug-of-war, Mary and Glen test the waters of attraction, only to find that their physical chemistry runs deeper than flirtation.

At first, a bicoastal romance suits them both—especially since Glen can swoop in and whisk Mary away on one of his company’s planes. But no matter how close they get, they’re still three thousand miles apart. And when Mary’s life is threatened, Glen realizes the one luxury he doesn’t have is time. Can he close the distance between them before it’s too late?

This is the first book in the “Not Quite” series that I have read, and I can assure it won’t be my last.

Extremely independent Mary didn’t like Glen in the beginning of the book.  It took her best friend Dakota having a baby to finally bring them together.  Mary and Glen live on opposite sides of the country, but Glen, being a pilot, he is able to come and go as he pleases.  He also whisks Mary away for out of town dates.  Mary knows what they have won’t last long as Glen is known for changing women often, so she enjoys it while it lasts.  But what Mary didn’t know was that Glen was falling hard for her.  The glitz and glamour of Glen’s life was one thing that Mary liked, but it was how Glen came to her aid when a stalker destroys her home that made Mary really fall in love with him.

This book had it all wrapped up in one fabulously told story.  Romance, suspense, great characters and the perfect plot hooked me from the beginning.
Posted by Janine at 6:42 AM