Twins for the Texan (Billionaires and Babies) by Charlene Sands - Review 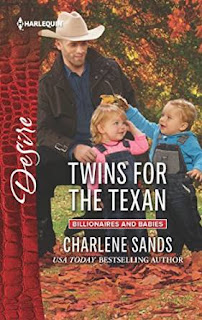 
Twins…and another baby on the way for this cowboy from USA TODAY bestselling author Charlene Sands!
After Wyatt Brandt rescues Brooke McKay en route to a Texas wedding, they spend one hot night together before going their separate ways. Now Brooke's back with news she isn't sure the wealthy rancher is ready to hear—especially when she discovers he's already a father…of twins!
Being a single dad is a full-time job Wyatt can't do alone. He doesn't expect the ideal nanny to be the beauty who briefly shared his bed. But he accepts her help gladly—not knowing her little secret will change his family forever…


It all started out as a one night stand.  Brooke McKay had run out of gas on the way to her friend's wedding and Wyatt Brandt found her on the side of the road.  He was also headed to the same wedding and offered to give Brooke a ride.  They got to know each other during the event and afterwards spent the night together in the hotel.  The next morning Wyatt left before Brooke woke up.  She wasn’t prepared for that.

Wyatt is still mourning the loss of his wife and the day of the wedding would have been her birthday.  So it was especially hard on Wyatt.  But thanks to Brooke, he was actually able to enjoy himself.  He would forever be grateful to Brooke for temporarily taking his mind off Madelyn.  But the next morning he had to return to his ranch and his eighteen month old twins.

The result of the one night stand wasn't anything either of them had expected.  Brooke ended up pregnant?  When Brooke and Wyatt start seeing each other again, she still can't find the words to tell him.  Brooke soon finds herself pretending to be the nanny when Wyatt's mother comes to visit to keep her from wanting to move in him to care for the kids.  How long will Brooke be able to keep her secret?  And how will Wyatt react when he finds out he fathered another child when he thought his two children were all the family he would need?

This book was well planned out and had a lot of depth and emotion to it.  It was pleasure to read.