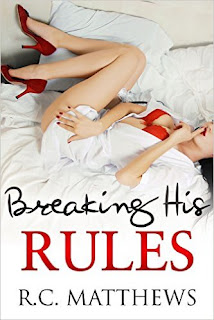 When I landed the best bartending job in downtown Chicago, the rules were as clear as the Grey Goose martini I mixed for him. Don’t sleep with the patrons. I had no problem with that. Money didn’t impress me. But Damon Baxter’s eyes did. Midnight blue, just like the name of his nightclub. The way they undressed me made me consider risking the most sought after job in the service industry. Nailing the position had been hard. Obeying the rules? Even harder.

Good thing I like it hard. I was never one for following orders. For one night with him, I would have sold my soul to the devil. And that’s exactly what I did. Let me tell you, hell in the company of Damon Baxter was blissfully hot. I offered him a single night of pleasure, but when he demanded another in that deep and sexy whisper, what could I say? He was my boss, and I always aimed to please…when it pleased me.

He didn’t care that I broke his rules. But was I ready to break my own?

Samantha Rayne left New York for Chicago to get away from her controlling father who sabotaged every job she had gotten in hope that it would make her return home.  When Samantha finally got a coveted bartending position as at Midnight Blue, Chicago’s hottest night club, she had no idea what she was in for.

Billionaire playboy Damon Baxter could have any woman he wanted, but he had set his sight on Samantha.  There was a reason he hired her and he had no plans on letting her know the truth.  He would follow through with his plan and then set her free.  But Damon was starting to fall in love with Samantha.  That was definitely not part of the plan.

When a man from Samantha's past arrives in town, everything changes.  She is afraid of Giovanni and how far he will go to get back together with her.  Damon vows to keep Samantha safe.  But how will Samantha react when she finds out Damon wasn't entirely honest with her when they first met?

Lies, deception, wild passion and new beginnings make this book one I that I was instantly hooked on.