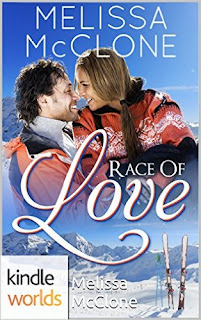 Harboring secrets has jeopardized Bree Winthrop's spot on the US Ski Team. She's lost her focus and drive to win. Her only hope to remain on the team is Riley "Ry" Guyette—the one man she doesn't trust. Bree must let go of the past if she wants to keep her dreams alive.

Ry knows what it's like to crash and burn after a ski accident sidelined him from competition two years ago. But his coach wants Ry to help a teammate regain her focus and competitive edge. Too bad he hasn't spoken to Bree in six years—six very long years.

Bree and Ry face a mountain of struggles. Will they be able to learn that forgiveness isn't the steepest slope they must conquer?

It’s never too late for love.

Six years ago, Riley “Ry” Guyette of the US Ski Team spent the night with Bree Winthrop but he had been too drunk to remember what happened.  Partying had been Ry's way of rebelling against his father who wanted him to give up skiing take over the family business.  All Ry wanted to do was compete and win more medals.  Ry hadn't thought about Bree over the years, but now his coach wants him to work with her so she can keep her position on the team.

Bree wasn't thrilled to be working with Ry, but she needed a win in the downhill and slalom portions to prove she was worthy of staying on the team.  She had been naive and star struck six years ago when she first saw Ry in the snow drunk and took him to his room.  But he turned out to be a jerk and she didn't want anything to do with him after that.

When Ry starts helping Bree, he learns a lot about her including something very personal that is going on in her life.  This news could be very bad for her racing career if it were to get out.  Is Ry the right guy to help Bree get mentally ready for competing and will he be able to convince her that is really is a changed man?

This is a wonderfully sweet story with likable characters and a well planned plot.  Bree and Ry seemed to be the perfect match.  They just needed a little push to realize it.  The story about Bree's mom and Coach Cunningham was a nice addition too.