Marry Me by Karen Stivali - Review 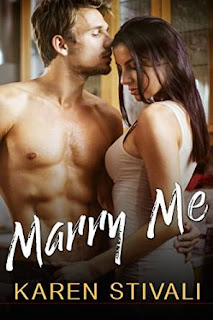 When British drummer Ben Davis lost his childhood sweetheart, he vowed to never love again. He immerses himself in his music, which propels him to international stardom and a lavish lifestyle, but has left his heart cold---until he meets creative and sexy clothing designer Julia Jones.

Julia's career may be skyrocketing, but her personal life tanked when her last boyfriend crossed the line from controlling to violent. Certain that romance is not in the cards for her, she focuses on her career. Then devastatingly sexy Ben strolls into her life and his intoxicating charisma is impossible to resist.

Once Julia allows Ben into her bed and her heart, they fall hard and fast. But when Julia's life is endangered, Ben's reaction terrifies her. They both must confront their past demons if they want a chance at a future together.

A bad boy rock star and a clothing designer should make for an unlikely pairing, but together Ben and Julia make the perfect pair in this steamy romance.
Julia Jones wasn’t interested in a relationship after her last one ended in violence.  She never expected the next man she fell for to be a drummer for a rock band known for having a different woman every night.  But she fell for Ben Davis and she fell hard and fast.

Ben never expected to fall in love again after losing his wife and unborn baby in a tragic car accident.  When he met Julia, he knew she was different from the women he had been meeting lately.  She was the designer for the band’s stage costumes and he was spending a lot of time with her.  The first time Ben joked around with Julia asking her to marry him.  He had no idea he would soon become serious about wanting to marry her.  He will do anything to make Julia his wife.

If a book could become an addiction, this one would be mine.  I was not ready for it to end.  I wanted more.  I wish it was a full length novel.  The story was very well written.  The characters had a lot of depth to them and worked well together.  The secondary characters made their appearance but didn’t overtake the story.  It was the perfect balance.