Review: The Devil You Know by Mimi Wells 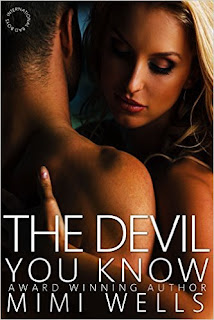 Domnhall Cameron, the Devil of the Pitch, has come a long way from the gritty streets of Glasgow. Now an international football star, he has a new team to launch, but only one thing stands in his way: Calla Stewart. They shared one explosive night years ago that ended with him in handcuffs and her out the door...

Now that Domnhall is the bad boy darling of European football, he and his millions are stirring up trouble from Scotland to South Beach. But Calla's divorced, down to her last few hundred bucks, and desperate to unload her house before it drags her down for good. So when Dom makes her an offer that is her ticket to a new life, she can’t refuse. Even if it means ten days at his command...

It's been ten years since professional soccer player Domnhall "Dom" Cameron has seen Calla Stewart, but he hasn't forgotten her or the time they spent together.  He is back in Florida for the start of a new expansion team and he has plans for Calla.  He wasn’t happy how things ended between them.

Calla didn’t like the idea of driving cross country for an appointment with a potential buyer for her father's mansion, but she will do what is necessary to make the sale.  She was shocked to find out the buyer was Dom.  He was the last person she expected to see.

Dom comes up with a plan for Calla.  She must spend ten days with him and then he will buy the house.  But as we all know things aren't always as they appear.  Will Calla be able to play along with Dom without falling in love with him?

Dom and Calla had a spring break romance that ended badly.   My heart went out to Dom when he ended up in jail and Calla didn’t even contact again afterwards and for the threats that her father made to him.  As I read the story, I could feel the attraction they shared for each other, but the incident ten years ago still stood in the way of their happiness.  I enjoyed this book and hope there will be another follow up.  I feel Isabel has a wonderful story waiting to tell.