Review: She Gets What She Deserves (A Fearless Fairytale Book 2) by Denise N. Wheatley 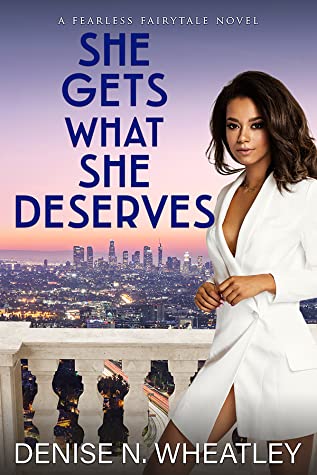 Some fairytales come with a plot twist…

Devon Jacobs finally has everything she’s been working toward—a busy, exciting life in LA, a seat at the writer’s table on the television show Here To Stay, and a promising relationship with the sitcom’s lead actor, Ryan Roberts. But in Hollywood, all that glitters isn’t gold. News that her boss doesn’t approve of workplace romances has Devon lying to keep her relationship under wraps while also struggling to have her voice heard in a room full of more experienced writers. And when rumors fly that the show may be canceled, the mounting pressure leads Devon and Ryan to reluctantly take a break.

Amid all the uncertainty, a family emergency sends Devon home to Indiana where she unexpectedly reconnects with her old crush, Jason, who insists he’s a changed man. Devon faces a life-altering choice—fight for her dream that now seems further out of reach or move home to the safety of the familiar.

What is it that she really wants?

Love and drama in Hollywood.

When the previous book, She Gets What She Wants, ended, Devon Jacobs was living her dream in Los Angeles and writing for a popular television sitcom. Her relationship with one of the actors on the show, Ryan Roberts, was growing stronger. In this book we learn about Devon’s struggles of working in the entertainment business, dating a celebrity and what happens as a result of Devon being called back home for a family emergency.  Let’s just say, pictures don’t always speak the truth.

I enjoyed revisiting Devon and her friends in this book. The author has a way of pulling me into the story right from the start and keeping my focus the entire time.  I can’t wait to find out what happens in the next book.  I would recommend reading this book series in order because each book is a continuation or the previous one.