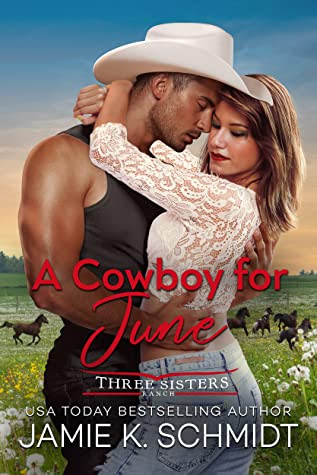 Former rodeo star June Grayson has hit rock bottom, so she heads home to Last Stand, Texas, and lands a job at the Three Sisters Ranch until she gets back on her feet. Restless and searching for her new normal, June’s determined not to get hurt again, but a sexy cowboy both calls to her wild side and soothes her need to run.

To Esteban Lopez, the Three Sisters Ranch is more than a job. He’s worked hard to help the ranch thrive and in return it has helped him support his family. But when his brother is passed over for a job in favor of a rodeo hotshot—who is also a lifelong crush of his—Esteban struggles with mixed emotions. His attraction makes him feel like a traitor, but he’s never mixed work and play.

One unforgettable night, June and Esteban blur the boundaries, and they’re not sure how to redraw them. She’s only in town temporarily, but he can’t shake the feeling that when she leaves, she’ll take a chunk of his heart with her.

June Grayson is back in Last Stand, but not because she wants to be.  June was a star on the rodeo, but she got kicked out.  Love wasn’t on June’s list of things to do; she needed a job and find out what happened the night she blacked out and wound up in rehab, which ultimately caused her dismissal from the WPRC.  When June first met Esteban Lopez, who works at Three Sisters Ranch, she thought she could just have a little fun with him while she decided what to do with her life and then move on.

Esteban had a crush on June for years and when he finally met her in person, he decided he wanted her in his life for good.  It would be a challenge to get June to part from her crazy ways and settle down with him.  It is also hard on Esteban because his family doesn’t like June, especially after she was offered a job one of Esteban’s brothers was promised.  So, now Esteban has to try and convince his family that June really is a good person underneath her wild and tough exterior.

So far, this is my favorite of the Three Sisters Ranch books.  June was so much fun.  I love her wild and rebellious ways.  Esteban was such a hard working and sweet guy.  They were total opposites, but they worked well together in the end.  I also liked seeing how June discovers what’s really going on with the WPRC and why they did her wrong.