Review: Texan for the Taking by Katherine Garbera 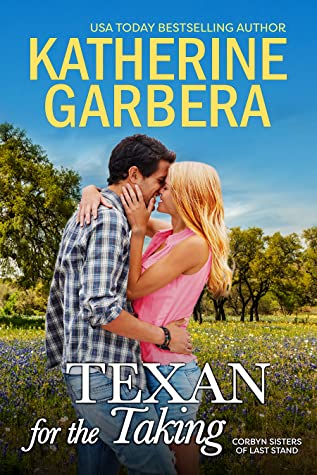 Who turned up the heat?

Classically-trained chef Delilah Corbyn walked away from the cutthroat celebrity kitchen world to return to her hometown of Last Stand, Texas. Delilah’s excited to open her own restaurant where she can finally make decisions without being scrutinized by the media. She thinks she’s living her dream until the new “it” chef saunters into town with a wink and a challenge. Delilah can handle heat in the kitchen, but he stirs up passions she’d long ago buried.

Jock Rossi has come a long way in the culinary world for someone who isn’t formally trained. Now he’s a rising chef with fame and money finally within his grasp. Determined to attract investors, he launches his latest restaurant in Last Stand. But when he meets his local competition, Jock's plans skew off course. Delilah’s not only as talented as she is beautiful, she’s impossible to fool. Or forget.

Can Jock win her heart with his secret recipe or are they only destined to battle it out in the kitchen?

It’s getting hot in the kitchen and it's not just the cooking.

Delilah Corbin is happy with her life and new restaurant in her hometown of Last Stand, Texas.  But the new chef in town, Jock Rossi, is starting to shake things up.  He is the hot chef from the popular television show Perfect Bite and he is opening his own restaurant in Last Stand.  Delilah soon finds herself unable to resist Jock.  But after being burned by another celebrity chef, Delilah wonders if hooking up with Jock is worth the risk?

Jock had another plan, other than just opening his new restaurant.  He wanted to get close to Delilah because he was about to compete on his tv show against Delilah's ex.  He is looking for information to help him win the cookoff.  As Jock grows closer to Delilah, will his secret be the end of their new relationship?

This is the last book in the Corbyn Sisters of Last Stand series.  I hate to see the series end.  But I couldn't have asked for a better ending.  There was just the right amount of romance, family and drama to keep the story interesting and entertaining.