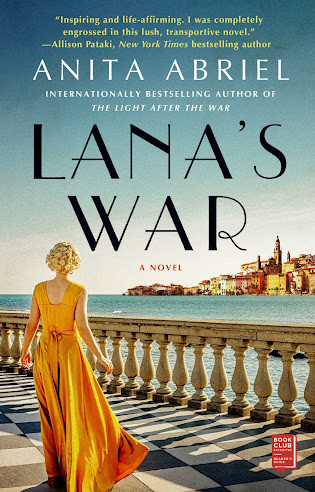 Paris 1943: Lana Antanova is on her way to see her husband with the thrilling news that she is pregnant. But when she arrives at the convent where he teaches music, she’s horrified to see Gestapo officers execute him for hiding a Jewish girl in the piano.

A few months later, grieving both her husband and her lost pregnancy, Lana is shocked when she’s approached to join the resistance on the French Riviera. As the daughter of a Russian countess, Lana has the perfect background to infiltrate the émigré community of Russian aristocrats who socialize with German officers, including the man who killed her husband.

Lana’s cover story makes her the mistress of Guy Pascal, a wealthy Swiss industrialist and fellow resistance member, in whose villa in Cap Ferrat she lives. Together, they gather information on upcoming raids and help members of the Jewish community escape. Consumed by her work, she doesn’t expect to become attached to a young Jewish girl or wonder about the secrets held by the man whose house she shares. And as the Nazis’ deadly efforts intensify, her intention to protect those around her may put them all at risk instead.

Lana had experienced many losses early in her life.  Her mother fled communist Russia, to Paris, so they could have a better life.  When WW2 started, and Paris was occupied by German soldiers, she witnessed one kill her husband and the stress caused Lana to lose her unborn baby.  Soon afterwards, Lana is approached and asked if she would consider working undercover for the French Resistance.  She couldn’t think of anything she wanted to do more.  She is sent to the French Riviera to help Jewish people escape to freedom.  What Lana didn’t expect, was to fall in love with the man she was living and working with.  It was supposed to be a business arrangement only.  But with the uncertainty of war, could it even work out?  They didn’t know if they would live from one day to the next.

I got swept away in this book.  Lana had a big heart and wanted to help anyone she could, especially when it was a child.  The friendship she made with a little girl named Odette really touched my heart.  I couldn’t wait to see how Lana would help her in the end.  There were also other unexpected friendships made along the way.  And there were a lot of secrets.  It was hard to know who to trust and who not to.  If you could say there is light and hope during the bleakness of war, this book brought it.

Thank you to Atria Books and NetGalley for this ARC in exchange for an honest review.