Review: A Hometown Proposal (The Shannon Sisters #3) by C.J. Carmichael 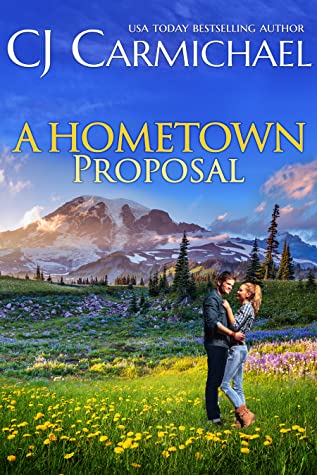 She’s looking for a second chance to reconnect with her daughter but finds so much more.

Since her husband’s climbing death a year ago, Maureen Shannon’s relationship with her twelve-year-old daughter has spiraled out of control. Desperate, she resigns from her partnership at a legal firm and moves back to her hometown in Whitefish, Montana, with the hope that family and nature can heal their wounds. Her investment in a heli-skiing and lodge operation makes financial sense, but her attraction to the owner doesn’t. He’s everything she’s come to hate—a man who makes his living chasing adventure.

Jake Hartman knows Maureen Shannon is off limits. She’s an investor in his company—a silent investor who's never silent. Worse, she’s a mom who’s beautiful, intelligent and makes him feel more alive than he’s ever known. A self-confirmed bachelor, he finds himself uneasily contemplating a very different partnership.

But will Maureen be able to let go of her past and build a future with a man who never imagined becoming a husband or a father?

Romance, a mystery and a new beginning.

Widowed attorney, Maureen Shannon has decided to start her life again after losing her husband to a tragic accident.  Moving back to Whitefish, Montana, where her sisters live is the first step.  Becoming a silent partner with Jake Hartman’s Grizzly Peaks, a heli-skiing business and lodge, was the last thing she thought she would do.  But she did and now they have become close.  Maureen even lets her guard down starts a new relationship with Jake.  But with a moody teenage daughter who might feel like Maureen is replacing her father, Maureen may need to rethink her plans.

This is the third book in the Shannon Sisters series and one that was hard to put down.  I enjoyed Maureen’s story and catching up with the other sisters.  There is a mystery that runs throughout the series and it was fun to see how it wrapped up and who solved it.  I would recommend reading this series in order.