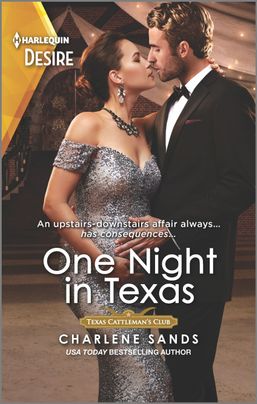 She was an employee’s daughter. He was the heir.

Now the tables have turned…

Gracie Diaz is no longer a young girl watching the Wingate family from afar. She’s a woman of means after a lucky lottery win. And she’s pregnant with Sebastian Wingate’s child, thanks to a red-hot night after a Texas Cattleman’s Club ball. But his family has nearly lost everything. Is he seducing her just to use her newfound wealth?

She won the lottery, but can she win the man of her dreams?

Winning the lottery was the easy part for Gracie Diaz.  Sebastian Wingate was a totally different story.  Gracie had a crush on him since she was a young girl.  They finally hooked up three months ago at a masked ball at the Texas Cattleman’s Club and now Gracie is pregnant.

Gracie was always off limits to Sebastian.  Since she was his sister’s best friend and the daughter of an employee, Sebastian never made a move on her even though he was attracted to her.  But now that Gracie is pregnant, Sebastian is willing to do anything to convince her that they need to be together and he won’t let anything stand in the way.

I had a hard time putting this book down.  I couldn’t wait to see how Gracie and Sebastian got their happily ever after; especially after a devastating misunderstanding almost ruined it all.  It was fun to see how Gracie was using her lottery innings.  Sebastian’s twin made for some fun unusual scenes.  I couldn’t imagine dating twins and having trouble telling them apart.  The romance, family and friends all rolled together made this a memorable story.