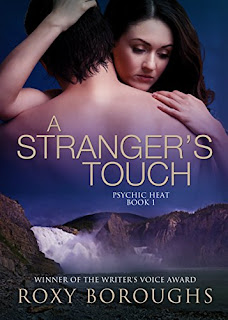 Single mom, MAGGIE HOLMES, is a by-the-book Calgary cop, until her seven-year-old asthmatic son, Davie, is kidnapped. Frantically grasping at any hope, she turns to STAFFORD WEBB, a former FBI psychic who retrieves information through his sense of touch.

Stafford is reluctant. Unbeknownst to Maggie, he helped with the Tommy Hutchinson kidnapping case six months earlier, but didn’t get to the child in time. Haunted by images of the boy, Stafford retreats inward and focuses on his other private obsession: finding the killer, James Ryan Morley—the man who also murdered Stafford’s older sister when she was sixteen. It's a trail that's led Stafford through the eastern states and across Canada.

Still, the desperation in Maggie’s eyes is too great for Stafford to ignore. Following his visions, they set off on a journey through the rugged terrain of the Northwest Territories—and along the jagged line between faith and reason.

This book grabbed my attention from the very first page.

Calgary police officer, Maggie Holmes, is introduced to psychic, Stafford Webb, when her son Davie goes missing.   At first Maggie didn’t believe Stafford’s psychic abilities but it didn’t take long to change her mind.  Stafford could actually see what the missing person was going through by touching something they had touched.  It was a wild ride through the Canadian countryside searching for Davie and I couldn’t put the book down until the very end.

This story took me by surprise.  I could not figure out who the kidnapper was.  Usually, I am pretty good at figuring them out.  I like the intrigue of the story and also like the little bit of romance in it as well.  I look forward to reading the rest of this series.