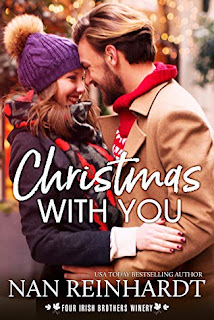 She’s loved him all her life… but will he be there when she needs him the most?

Disheartened and adrift after being written out of a hit TV show, actor Aidan Flaherty returns to his family’s historic winery, where he’s invested some of the fortune he’s made. As the holidays approach, Aidan becomes intrigued with the old showboat that’s dry-docked just east of town… and even more intrigued with the daughter of his former mentor, who now owns it. He decides to buy the boat and restore it to its former glory.

Single mom Holly Santos is back in River’s Edge after her divorce and she is over men in general and actors in particular. If she could only get rid of her father’s old showboat, a source of fascination for her son, Mateo. She never expects her old crush to walk into her tea shop or the fireworks that happen every time they’re in the same room.

Can Aidan convince her that he is determined to restore their shared heritage on the showboat and that he’s home to stay?

The man of her dreams has just walked back into her life, but now she is afraid to love him.

Single mother Holly Santos and her teenager crush, Aiden Flaherty, are thrown together again when Aiden moves back home after his tv show gets canceled.  Aiden sets his sight on Holly’s father’s old showboat, the River Queen, where they both worked when they were younger.  But Holly doesn’t want to sell the boat to Aiden.  Her son, Mateo, is obsessed with it and when he is hurt on the boat and Aiden comes to his rescue, Mateo starts to idolize Aiden.  Holly doesn’t trust actors after her ex left her for acting.  Will Aiden be able to convince Holly that not all actors are alike and some of them are serious about a relationship?

The Four Irish Brothers Winery series is based on the Flaherty brothers in River’s Edge, Indiana.  This book is a fantastic addition to the series.  I enjoyed Holly and Aiden’s story and catching up with the other characters from previous books.  I also enjoyed the family dynamics and small town charm.  Mateo is a great part of this story too and steals quite a few scenes.