Review: Christmas at the Edge of the World by Kate Hewitt 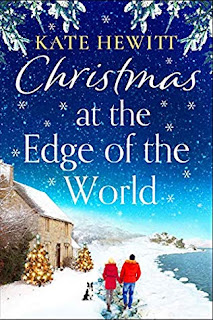 When Laurel West discovers her estranged sister Abby has checked herself into rehab and wants her to take care of her fourteen-year-old son, she doesn't hesitate to step in. Abby was there for Laurel a long time ago, and she longs to be able to offer the same. However, as a single woman who still dreams of the fairy tale, Laurel isn’t prepared for teenaged Zac’s sullen moods or silent rage. When he’s expelled from school, she decides to take drastic measures and temporarily relocate them to her great aunt's cottage on the windswept hills of the Orkney islands north of Scotland… about as far as she can run from their problems, but will it be far enough?

From the moment they step onto the island's shores, everything seems to go wrong... including a run-in with eccentric sheep farmer Archie MacDougall. When Zac gets in trouble at the village pub and is rescued by Archie, Laurel thinks things are only getting worse. But Archie’s suggestion of putting Zach to work on his farm might be the change he needs, and Laurel strikes up a surprising friendship with a man who is about as far from the fairy tale as she can imagine. Can such an unlikely and impractical love bloom in such a brief moment out of reality? And will two lost and lonely souls find each other at the edge of the world?

A story full of Christmas miracles.

Laurel’s Christmas plans got turned upside down when she was informed that her estranged sister was in rehab and Laurel was needed go to London to look after her teenage nephew, Zac.  Zac was soon kicked out of school and Laurel decided a change of scenery might do them good.  They went to Orkney, Scotland, to Laurel’s aunt’s cottage that held so many memories from her childhood.  Laurel wanted Zac to experience his first Christmas in a special place.  What happened next was a dramatic change in both of their lives by the hands of Laurel’s aunt’s neighbor, Archie.  Zac started coming out of his shell and Laurel started having feelings for Archie.  But Laurel knew they couldn’t have a relationship because they lived so far apart.  Another Christmas miracle soon takes place, and this one will change all of their lives forever.

This book was a real treat to read.  There was so much emotion in the story.  I enjoyed the Scottish setting at Christmas time and the characters.  There were so many surprises in the book that I just didn’t expect.  All around, it was a wonderful Christmas escape.