Review: Off the Market (Texas BBQ Brothers, #2) by Audrey Wick 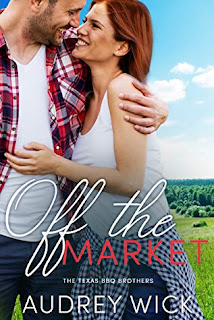 Can the man who saved the day win her heart?

Quinn LaFayette is in her inaugural year as library special programs director of Last Stand, but when the kickoff performance for the children’s summer program goes terribly wrong, she has to save face as well as her job. She has a surprise advocate in Cole, whom she did her best to ignore in school. Seven years has only made Cole more appealing, but Quinn is determined to resist the sparks that fly between them because they are too different.

Restaurant owner Cole Hutchinson is no bookworm, but thanks to his fast-thinking antics, he ends up saving the day at the library and earning Quinn’s praise in the process. He’s tempted to seek more, but he’s juggling plenty of female attention from gracing the June edition of Modern Texas magazine featuring barbeque. Cole’s not interested in revisiting a woman from his past, but there’s something about Quinn that he can’t quite ignore.

Can Cole prove that opposites really do attract?

I really enjoyed the first of the Texas BBQ Brothers books, so I couldn’t wait to get this one in my hands.  Cole and Quinn’s story is really special.  They are total opposites who are thrown together by unusual circumstances.  Cole is one of the owners of the popular BBQ joint in Last Stand called The Hut.  Quinn works in the library as the director of special events.  When Quinn’s first summer reading event takes a turn for the worse, Cole, who stopped by to pass out free meal coupons to the kids, takes over for the original guest speaker by telling funny jokes to the children.  I think I fell for Cole at that moment.  In the first book, he seemed to be all about business and not much else.  So, this was a fun and sweet side to see.

The relationship between Cole and Quinn took some time to develop.  Even though they knew each other in school, they weren’t friends back then.  So, when they did become friends, they stay just friends for quite a while.  But once their relationship changed to romantic, there was no holding back.  Then, there was this one hiccup that almost ruined it all.  I enjoyed seeing how they worked through it to find their happily ever after.

The author created characters that seemed so real, I could almost picture them living and working in my town.  Her story telling had me flipping the pages through to the end and it was hard to close the book at the end.  I liked these characters that much.  There is also a cute library cat who was a fun addition to the story.  Even though this book can be read as a stand-alone, I would recommend reading On the Market first so you get to know the characters form the start.