Review: All of Me (Compass Cove Book 3) by Jeannie Moon 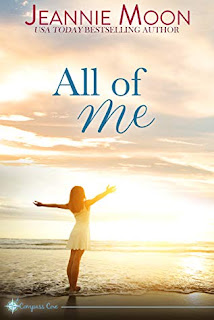 Lilly Vasquez has returned home to Compass Cove after making her way in Hollywood as a hair stylist to the stars. With such a successful career, why she moved back to Long Island to open her own salon is a mystery, and Lilly's not talking. That is until a movie shoot nearby drops the trouble she thought she left in California right into her backyard.

FBI Special Agent Jack Miller has floated in and out of Compass Cove for the last fifteen years, rarely staying in town for more than a few days because he’s so wrapped up in his work. But when a complaint about a potentially dangerous situation in town lands in his lap, Jack is gobsmacked to see the name of the woman who has occupied his thoughts for more years than he can remember, Lilly Vasquez.

With the excitement of a big family wedding, Jack has an excuse to stick close, but Lilly doesn’t appreciate the attention, especially since it stirs up a bee's nest of long-buried feelings. Likewise, Jack is dealing with his own attraction to the fiery brunette, and it’s making him crazy. He needs to stay objective to keep Lilly safe, but his heart isn't listening to reason. Will the long-time friends succumb to the small town magic and take the biggest risk of their lives? Or will they play it safe, and miss their happily ever after?

Old friends, Lilly Vasquez and Jack Miller, are reunited when Lilly returns to her hometown of Compass Cove and Jack takes on the job of protecting Lilly from her abusive ex.

Eighteen years ago, Lilly confessed her love for Jack, but Jack turned her away.  Lilly never got over the rejection.  She moved to LA where she became a stylist to the stars and eventually ended up in a relationship with a well-known actor.  When the relationship turned abusive and Lilly couldn't take it anymore, she went back home.

FBI agent, Jack didn’t plan on settling down.  With a job that had him traveling all the time, a wife and family didn’t fit that lifestyle.  But when he takes on the job of protecting Lilly, everything changes.  He has finally fallen in love and will do anything to keep Lilly safe and start a new life with her.

I really liked the previous Compass Cove books, so I couldn’t wait to read this book.  Lilly is a character that I could easily relate to.  She got taken advantage of and in a situation that got out of control.  She found the strength to leave and take her life back.  With the help of her friends and family, Lilly was able to feel safe again and start her life over.  It was fun seeing her and Jack finally get together.  The story flowed easily.  The plot was well written and all of the characters fit well within the story.