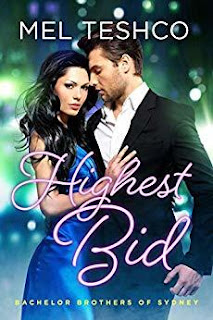 Galan Black carries a burden he can’t share with anyone, least of all his two brothers. Not even after the blood, sweat, and tears, it took for them to open and make the Black Pearl Nightclub a raging success. He’s just glad his secret doesn’t haunt him half as much in the arms of the eager women he takes to bed.

Yet he can’t stop thinking about the plain Jane bartender and waitress, who he impulsively hired against his better judgment. Then she steps half-naked onto the stage for the club’s once-yearly charity auction, and he can’t keep his bidding paddle down, or his eyes off her. He’ll have her for the night, and get her out of his system once and for all.

Layla doesn’t trust men, yet her infatuation with the eldest Black brother is getting beyond a joke. She needs to experience a night in his bedroom, and get over her silly fixation. But then one night becomes two, with the heat between them showing no signs of cooling. Until Layla’s trust is put to the ultimate test and dirty little secrets are exposed.

He was her boss and should have been off limits.  But she couldn’t get him out her mind.

Galan Black, who owned the Black Pearl Nightclub with his brothers Aiden and Liam, had become obsessed with his new employee Layla Selvey.  She was far from his type, but there was something about her that intrigued him.  Then she came out on the stage of the Black Pearl's charity auction, wearing next to nothing, and took Galan's breath away.  He had to have her.  Let the bidding begin.

Layla had been working for a Galan for six months and had constantly fantasized about him.  The charity auction was a way to get him to notice her.  And notice her, he did.  His winning be was one hundred thousand dollars.  One night with Galan would not be enough.  Layla wanted the whole package and wanted it forever.

This book might have been shorter than I expected, but it was packed with action, emotion and explosive intimate scenes.  Layla and Galan were both basically broken characters, having lived through things no child should, but it made them stronger and provided an interesting background to the story.  I enjoyed the way the author told the story.  The book held my interest through the entire story.  I can't wait to read the books following this one so I can find out more about Galan’s brothers and the women they fall in love with.