Review: Where the River Bends by Elsa Winckler 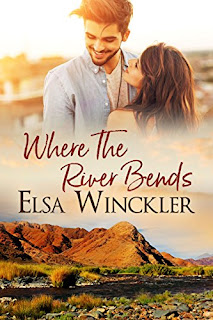 Kalinda Evans works for the Anglo-Boer war foundation in Canada. She's sent to South Africa to make sure everyone who lost their lives in the war will be remembered. On her drive to the guest farm in Kimberley, South Africa, Kalinda picks up a female hitchhiker and is startled when just moments later, the woman vanishes. Kalinda would be convinced she was dreaming…except there’s still a white lace handkerchief on the passenger seat.

Extreme sports enthusiast and computer game designer Zack Carter is always after the next big challenge. He’s far too busy for romance and adheres to a three-date rule, until he meets his parents’ latest guest. When she relays the story of her mysterious experience, Zack’s family shares the local ghost story. Kalinda and Zack work together to solve the puzzle of the ghost and how it all ties in with the war and the work Kalinda is doing.

As their attraction grows, Zack realizes he no longer feels the need to prove anything to himself. He only needs to prove to Kalinda that he’s more than a good time.


An intriguing story that I couldn’t put down.

Kalinda Evans divorced her abusive husband and left South Africa to go to Canada to work for the Anglo-Boer war foundation.  She has just been sent back to Africa to do some investigations at the war museum.   On her way to the guest house in Paardeberg, where she will be staying, she encounters a woman standing on the side of the road.  Believing she needs a ride, Kalinda lets her in the car.  But, the next thing she knows, the woman has disappeared leaving behind a white handkerchief.  At first she thought her mind was playing tricks on her.  When she finally talks to the people she is staying with about what happened, she learns she has just seen a ghost.

Game designer, Zack Carteris, is visiting his parents, while recovering from pneumonia.  When Zach meets Kalinda, he becomes interested in her.  Zach has never been able to commit to any woman, but there is something about Kalinda that might make him change his three date rule.

I was really surprised by this book.  The description got my attention; I thought a ghost story would be fun.  But, I didn’t realize how well I would end up liking it.  I was pleasantly surprised to find myself really getting into the story and not wanting to stop reading when I knew I should be going to bed.  I liked learning the history of the war and really got into Susie’s story and liked how she brought Kalinda and Zach together.  I haven’t read anything by this author before, but this book won’t be the last.  I like her story telling and writing style.
Posted by Janine at 5:00 AM