Review: A Vicarage Wedding (The Holley Sisters of Thornthwaite Book 3) by Kate Hewitt 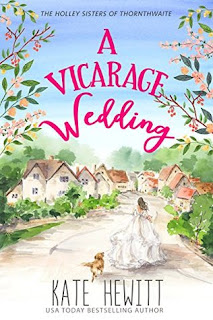 Rachel Holley has always dreamed of a wedding—the white dress, the fairy tale, and of course, the happily-ever-after. But when her fiancé breaks it off the night before, claiming she doesn’t love him, Rachel’s fairy tale ends in ashes.

Homeless, hopeless, and feeling like her life has been completely derailed, Rachel must start over in all sorts of ways—and hold her head up high in the fishbowl of her tiny village. The last person she expects to become a friend is Sam West, the taciturn owner of The Bell, Thornthwaite’s rougher pub, and a little rough around the edges of himself.

But as Rachel gets to know Sam, and sees him caring for his orphaned nephew, she finds herself drawn to this enigmatic man. Nothing about Sam is what Rachel expected in a life partner, and yet she can’t deny their increasing closeness. But can love flourish on the rebound? And will there be a vicarage wedding after all?

When first started this book, I felt sad for Holley.  But, the further I got into the story, the more I realized Dan breaking up with her before the wedding was actually the best thing for them both.  Holley seemed to be a bit of a perfectionist and needed to see that love and life didn’t always come wrapped in pretty packaging.  Sometimes love is a little bit messy and imperfect.  You don’t always get the big house you were dreaming of either.  When Holley met Sam, he was the total opposite of what she normally looked for in a man, but even though they had different upbringings, lives and goals, they meshed really well.  And when Sam got custody of his troubled nephew, Holley was right there to help Sam out.  She was needed more than she realized.

I would almost call this book more of a women’s fiction than romance because there was so much more than just the romantic part.  There was family drama as well as Holley’s journey into becoming a better version of herself.  The story didn’t just center around Holley and Sam either.  There was a lot about life and Holley’s family as well.

A of couple lines in the book summed it up perfectly:
She’d been thinking about what she wanted, what kind of life she envisioned for herself.  But what if happiness was to be found in something else entirely?  And not just happiness, but importance? Meaning?  Something that had been missing now for a while.